Just like what you have read in the books. It is a tourist-orientated place. Most people would suggest that you stay high up in the mountains (Wengen, Lauterbrunnen) to avoid the tourist scene. If peace of mind and natural beauty is what you seek, then you should stay in the mountains.

My itinerary on the other hand, required a day trip to Berne and also some shopping, furthermore, I had to try out a few recommendations for eating out in the area, so Interlaken was where we chose to stay.

As the name suggest, the town itself lies in between two lakes, Lake Thun and Lake Brienz. I would suggest at least a boat trip on either lake if you have the time.

END_OF_DOCUMENT_TOKEN_TO_BE_REPLACED

For those of you who are interested in reading opinions on the ins-and-outs of dating a boy or a girl, check this out.

40 Days of Dating, by two best friends. Will they still be a couple? Or will they just be friends? Read through all forty days to find out!

Two of my favourite things together:

Do or do not, there is no try!

What’s with the rage about 3D all of a sudden? It’s more expensive and some people get headaches afterwards. Can you imagine the number of hours and the budget that goes into making a 3D movie? Someone came up with a cheaper solution, add two white lines to your moving image to create a ‘sense’ of depth. But then again, who’s going to shell out the money to watch a movie with two vertical lines throughout the show?

Hugo Yoshikawa has an A-Z collection of European cities, try to get as many as you can of the places that you have been to in Europe. Here’s mine:

A is for Amsterdam

END_OF_DOCUMENT_TOKEN_TO_BE_REPLACED

After our day-long train travel with a side excursion to Gruyères, we have finally arrived at the mountainous part of our Swiss trip — Interlaken. The guidebooks will say how this is a touristy place and it is true. Almost every shop here is catered for tourists, since we look like Chinese, they even have shopkeepers that are willing to speak in Mandarin, just for your sake. Probably one of the firsts in Switzerland, hearing a non-native language.

Most guidebooks would suggest a stay high up in the mountains, but we had other plans besides a trip into the Bernese Oberland, so we decided to stay in Interlaken. It is after all, just a half-hour trip into the mountains. And we have the Swiss Pass, so train travel is covered.

Restaurant Laterne is located in the suburbs of Obere Bönigstrasse right in front of the sports arena. Away from the hustle and bustle of the tourist centre. We were early and it was just after a slight drizzle. Not a good sign, this raining.

The restaurant is huge! It can probably sit around 50-60 patrons at one go. It is decorated with some of the local sport stars, a kind of wrestling-type of sport. Not familiar to my eyes. But we were here for the food. There were only 2-3 other tables that were seated, so we were being attended to almost immediately. For our sake, they had the menu in English.

We were here on the recommendation to try their special. A mixed-plate of veal, beef, pork and chicken breast. It was so good that we had another helping, after initially ordering only two!

“Maybe it’s just because we didn’t have a proper lunch,” Dad added.

Mom wanted something different so she went for the pork steak, the Schweinssteak.

“To top it off, let us try some fish too!” exclaimed the wife.

So with that, we had almost all the meats that was on offer. Although I wanted to tell her that there was no sea nearby and this was most probably the fish from the lake.

If you read TripAdvisor before coming, you might have been put off by their comments about the service. I for one, do not know what was so irritating about it. To me, service is prompt in taking orders and serving, plus maybe the cleaning up and offering desserts. I don’t want someone to hunker over me every ten minutes. In my opinion, the restaurant served us well. The food was delicious.

The bill? CHF193. For five dishes and four drinks. 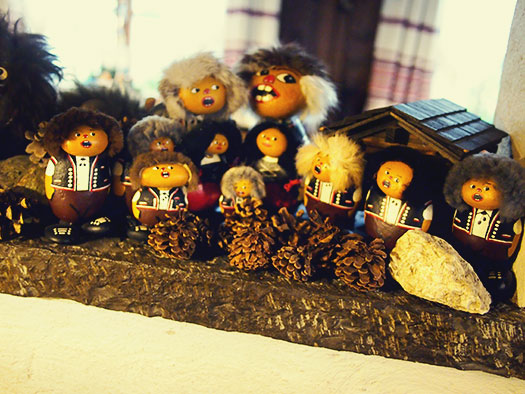 It was the heart of summer and the roadside cafés in Paris were brimming with patrons. Enjoying their cup of coffee and watching the world go by. It has been five years since the boy first stepped into the life of being a Parisian. During that time, he had prided himself as a go-to guy for all coffee and café related stuffs within his arrondissement. He has tried and tasted the various coffees at the numerous cafés that dotted the area that he stayed and worked in. There were cafés that were suitable for afternoon coffee because of their sandwiches, cafés where you could get an early-morning pick-me-up, he knew it all.

So it came as a surprise when he found a new café opening just two blocks away from where he worked. The place was a prime area but when he tasted the previous owner’s coffee, he was put off by the taste. And so it proved to be correct, that franchise lasted all of three months before closing shop. Now a new proprietor had taken over. Maybe this time it would work, the boy thought to himself.

It took him two days before having the luxury of visiting this new café. The décor was unpretentious, typical of all Parisian café but it was the name that caught his eye, just a simple Café. Now this was surprising as most new coffee shops would rather have a catchy name in order to place itself right in the mind of the people, but the present shop owner went for the mundane, Café. He went in and took a sit by the counter. It was his favourite spot whenever he went to a new place. The counter will give him a view of how the barista prepares the coffee and it is also a spot where he could chat up with strangers while at the same time, observe the rest of the patrons. He liked observing and making mental notes. Today, he took up seat at the counter right in front of the barista, a girl, who incidentally was the owner of the new shop.

“Un café s’il vous plait,” he made an order.

END_OF_DOCUMENT_TOKEN_TO_BE_REPLACED

Last Gentleman In Town
Create a free website or blog at WordPress.com.